COVID-19 Update: We are currently open and taking precautions. All our technicians wear mask and gloves when we visit your place and do our best to take responsibility to uphold our duties during the job.
Possum Removal Melbourne | Possum Control Melbourne | 1300 997 272 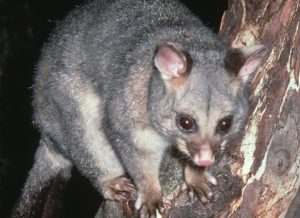 Possums are cute and cuddly animals. These animals dwell in trees. The Possums have strong, sharp claws with hand-like back feet. The structure of the possums is suitable to dwell in the trees. “But, these animals intrude into shed or attic and dwell on these and that’s where possum control comes”. This species of animals prefer to live on trees and rarely come down in search of food. The possums are nocturnal and remain active during the nights! Contact us for possum removal & control services in Melbourne

The possums can create a nuisance if they intrude into your property. These animals are protected species under Wildlife Act of 1975. If you are troubled for the trespassing, you can’t just appoint a professional pest controller and kill or remove the animals. Don’t even think to harm the Possums if you don’t want to face legal actions!

There are certain risk factors if possums start dwelling in your property. You must have an idea about this species of animals! Learning about the types of Possums found in Australia, you can stay prevented from any legal actions. If you think to allow the animals to dwell in your roof or any other place, you must learn about the health concerns associated with residing with the possums. It is essential to know about the best way for possum control without any offending the Wildlife Acts. The possums are nocturnal, and it may be difficult for you to locate them until the number of possum members increases.

There are many pests, out of which the most common pest are Rats, cockroaches, termites, bees etc, but ever have you heard about Possums. If you have any knowledge about Possum then you must be aware that Possums are cute looking furry animals which resembles a rat and loves their natural surroundings.

Ironically, they are termed as pest as they often find shelter in residential premises especially during winters. Possums are of many kinds but there are 2 popular varieties of possums found in Australia namely Common Brushtail Possums and Common Ringtail Possum. To your surprise Possums in Australia are protected under the act of 1975, which states that it is illegal to kill or relocate possum from their natural surroundings.

Therefore, it becomes even more difficult to control Possums and before taking any DIY methods it is advisable to be educated about the law which protects Possums. However, there are several pest control agencies which deal in control possums who are well aware of all the methods and techniques which also adhere to all the rules and regulations pertaining Possums

Collecting the best info would be helpful in possum control & all pest control for your property in a safe way!

A possum is a small to medium-sized marsupial that is very commonly found in some parts of Australia. Their charming and fleecy appearance make them look very cute. They are known to be harmless; however, they are still regarded as a pest as they can be a carrier of few diseases such as bovine tuberculosis (TB), In addition, can damage property, garden crop. This is one of the reasons why possum pest control agencies are quite well known in Melbourne

Since they are proficient swimmers and climbers, hence they are often found in hollow logs in a tree. With the help of sharp claws and sharp teeth, they find it very easy to reside in trees. They often climb down in search of food and water, and this may lead them to follow their way into the house or garden. They have been spotted in roof voids of home. They are nocturnal introverted animals that are itinerant by nature and are always on a lookout for trees and burrows to reside.

Signs of presence of possum

How do I get rid of possum in my garden? Possums love to feed on leaves and fruits, so if they are ruining the plants in your garden then it is time for you to do the following, which would help them go away. These are also a few of the methods, which are used for Possum control

How to get rid of possums from my yard

How do I get rid of possum in my roof?

Since possums are excellent climbers, thus it is best to remove branches, which reach till the roof.

How do I get rid of possum in my attic?

Attic can be a very relaxing place for possums to reside, as it is inherently warm during winters due to all the insulations and quite cool during summers. However, it can be very distressing for the homeowners as possums can destroy the fittings and can eat away the insulations. The best way to remove a possum from the attic is a trap. Possums are protected by law according to the act of 1975 however it is allowed to trap a possum residing in a property by the owner, or the manager of the building or a DELWP licensed Wildlife Controllers. Another thing, which needs to be kept in mind, is where to release the trapped possum as relocation is regarded as inhuman and is not legally permitted. Therefore, it is advisable to get in touch with a registered vet.

If the trap method does not work then it is prudent to get in touch with professional possum control Melbourne companies who are well experienced in catching a possum, they are experts in catching possums with hand or by a snare pole.

There are 23 species of possums in Australia, Out of these 23 species; the most common two species are common brushtail possum and common ringtail possums. Just like other species of Possums, the common brushtail possum is also nocturnal. It mainly feeds on fruits and flowers, but in a few cases, have been seen eating rats, etc. In Melbourne, they get an abundance of eucalyptus leaves which they are very fond of eating. The common brushtail Possum comes in colours of silver-grey, brown, black, and gold. Normally the brushtail possum loves to live in tree hollow and burrow, but when indoors, prefer to hide in roofs and dingy spaces. As the name suggests, they have a bushy tail, along with that they have a cute looking pointed face and a pink nose. The common ringtail possum most distinguishing feature is its size, which can range to as big as a cat. They are nocturnal as well but prefer to stay in the dense forest and feed on eucalyptus leaves. They are generally grey in color and have white fur on the belly with some orange streaks.

It’s a known fact that Possum population is protected in Australia and are thriving in the East of Australia and SW Western Australia, and Common Brushtail Possums are prospering all over mainland Australia, Tasmania, and Kangaroo Island, however, in Tasmania, the legislative have given permission to control possums as they destroy the crop. However, other than Tasmania there are strict laws to protect possums.

According to the Wildlife Act, 1975 Possums are protected animals that means it is illegal to harm Possums in any way. They cannot be tamed or kept as a pet without the approval from  DELWP.

It is also illegal to harass or relocate to the environment, which is not suitable for their survival. However, there are ways by which they can be controlled. Common brushtail possum can be trapped if they are living in your premises and can be taken to a registered vet or be released in an environment where it can thrive. In case of common ringtail possum, it is illegal to even trap it without a permit. The fact that they do not generally live in residential premises, therefore trapping is out of the question.

The government and the Wildlife Act 1975 has laid very strict rules and regulation for traps used for possums. In addition, they have very strict and well-defined norms for their relocation. Therefore, it is always wise to engage a professional Possum pest control Melbourne agency

Things to keep in mind while using a trap.

All traps must be check frequently and strictly within 2 hours of sunrise.

Trapped possums should not be harassed and should be kept in a quiet place, where they are protected from harsh weather and another animal until they are released.

Things to keep in mind for releasing a possum

If you are not confident about dealing with possums then it is greatly advised to get in touch with a possum pest control agency who is well experienced in all the legal implications and are experts in possum treatment.

Pet an animal such as a dog or a cat. Possums are often sacred of animals who are bigger than them in size.

Professional treatment and techniques for Possums

Since they are experts, therefore make a combination of methods to catch a possum and release it in the best possible manner, which is legal.

Since possums are unlike other pests, which can be removed or exterminated, therefore, it is very important to know the law and it’s removing techniques. Since they come under protected wildlife under the act of 1975, therefore, it is wise to get in touch with a professional possum pest control services to get rid of possum from your property. They have all the required knowledge and are aware of the law. They use more friendly and gentle ways of treatment, which do not come with any legal implications. If you are caught, using any technique, which is not legally authorised, then you can end up paying a fine as huge as $5000 and other legal implications, which will not only ruin your record of accomplishment but also cause a black mark on your credit rating

Possums are non-aggressive! But, these animals tend to eat anything and take

Possums in Australia are protected with Wildlife Act of 1975. You can’t even

Possums are non-aggressive! But, these animals tend to eat anything and take

You, should never encourage the wild animals to nest or feed in the surrounding

Things you should know

There are numbers of pest control companies in Australia. You can’t just

Australia is popular as the native place for diverse species of animals. Australia is